Outbreak of war in Poland

“On 1 September 1939 we were woken up early in the morning
by bursts of thunder. We could not decide if it was exploding
bombs or thunderous gunfire. At the same time, the radio ordered
that the country be defended: by way of anti-aircraft defence, by
way of service of the Red Cross and the digging of trenches. The
war between national socialist Germany and Poland had undoubtedly
begun.”

“This was also the first Friday night when Shabbat was not
sanctified. It made me sad that this regular family celebration went
silently by, unmarked. Many of our neighbours assembled in our flat
and we listened together to the boastful speeches of the Polish military
leaders who promised that the German invaders would soon be
defeated and chased away.”

“News reports came thick and fast. Shocked Polish soldiers
spoke of regiments of German assault infantry rolling towards us in
trucks. The atmosphere became oppressive and my appetite for interesting
experiences evaporated. Slowly it became clear to me that the
planes were all of German origin and the Polish Army was unable
to resist the German invasion. On Saturday morning we watched
the municipality buildings being evacuated. Public life and traffic
had come to a standstill. Rumours abounded that German tanks
were already close to town, and that the German army’s capability
to perpetrate acts of violence should be feared.
With little hand luggage, my father, a few neighbours and I
made our way to the next village to the east. My other relatives had
fled the day before. The streets were packed with refugees, many pulling
oxen, cows and goats behind them. Others pushed small carts
filled with all their worldly goods, on top of which sat crying children.” 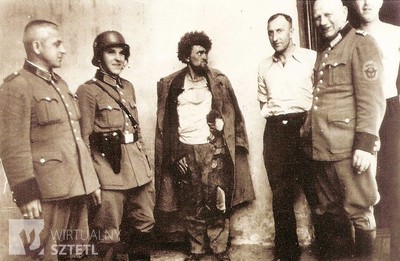