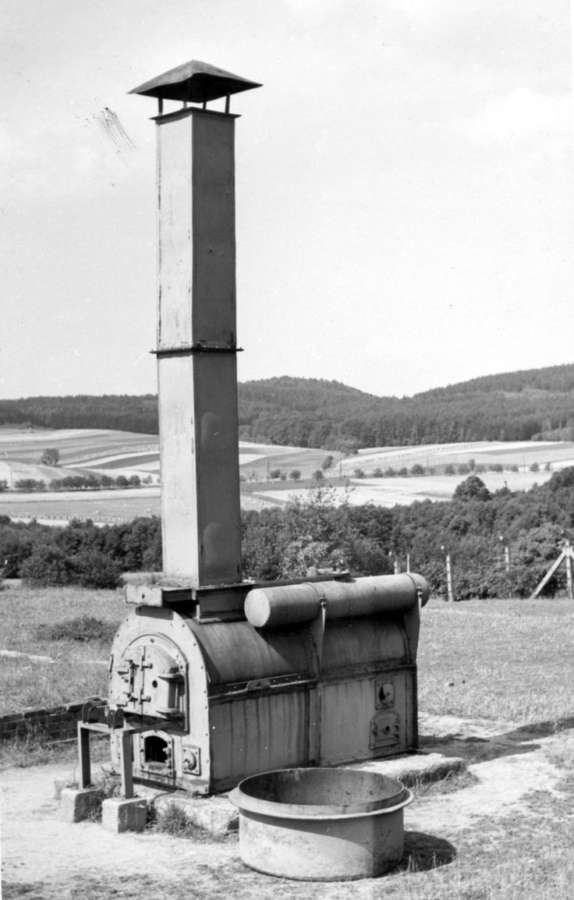 First exposure to a crematorium

Remains of crematorium at Gross Rosen

“We spent the cold February days standing for hours freezing in front of our barracks… From time to time we were made to work, and if we were lucky we got a bowl of soup or a piece of bread.

…On one occasion I had to report to the crematorium for work. The crematorium was incapable of disposing of all of the many corpses that were left behind by the transports that passed through the camp. In the deep frost, in front of the  crematorium there was a towering pile of corpses that were frozen and rigid. This was the first time I saw human beings horribly distorted. Emaciated, skin-covered skeletons, all piled up and higgledy-piggledy, naked and exposed, lay there with staring eyes and gaping mouths, as if they wanted to scream. Until this time I was always conscious of our proximity to death and was deeply moved and disturbed whenever I witnessed the demise of an individual. I suffered with them and I gave them a special place in my memories. However, what I saw now filled me with naked horror. Piles of entangled bodies, naked, hairless skeletons, just skin and bone, covered with mucus and faeces, maybe forty or fifty in number, lying on the frozen earth, waiting to be burnt in the crematorium. As I went about my work carrying wood and removing ashes, my eyes kept returning again and again to the mound of bodies. Was this to be our fate, was this also to be my destiny?

I was haunted by this image of the soundless, screaming dead. I was utterly bewildered. I had lost the will to live. After a few hours we were sent back. A piece of stale bread was our reward. Some devoured it ravenously. Others, myself included, put it aside, we could not eat a thing. Those of us who had been together in Fünfteichen had until this time been spared the direct encounter with the crematorium. It was only here in Grossrosen that we were unambiguously confronted with the grim and stark reality of our own destiny. However, gradually our emotions were dulled and eventually gave way to the indifference to which we were much more accustomed.”