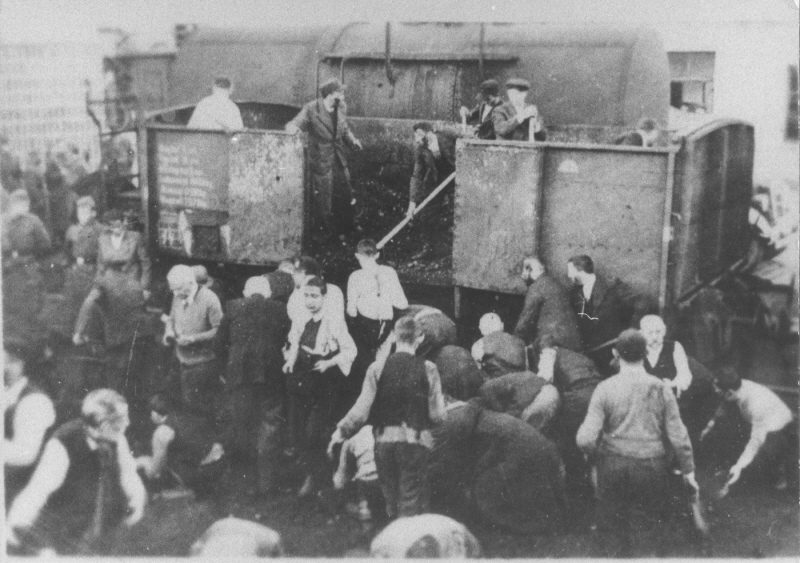 “After a few hours we reached the suburban railway station at Schweidnitz. Waiting there was a train that consisted of coal wagons. We were quickly assembled into groups of 150, and like animals we were herded into the empty wagons. As usual, this was accompanied by a hail of blows with pistol butts by the SS men on guard. The wagons were so crowded that it was difficult to remain standing; sitting or lying down was out of the question. The weakest amongst us staggered to the floor. There they lay on the feet of those who remained standing and with their last strength they in turn struggled to free themselves from this burden by continuously pushing the bodies lying on the floor. The Kapos stood, legs apart, at the open wagondoors, claiming more space for themselves. The Germans among them, mostly professional criminals and convicts, felt themselves superior to the masses of other inmates because it was rumoured they could join the SS. In actual fact many of them had applied for SS uniforms because they were impatient to exchange their hated concentration camp garb. Whether true or not, these Germans felt themselves compelled to claim their privileges. They quickly monopolised a large part of each wagon for themselves, beating and trampling those around them. The coal wagons were without a roof. The fine coal dust covered the floor and sides. Very soon it clogged every pore of our skin and lay suffocatingly on our throats.”

… “There were neither buckets nor toilets in the wagons, so some urinated where they stood. We were in open wagons, so no one cared. Soon after, some who suffered with diarrhoea or dysentery tried to excuse themselves, but the Kapo sought to persuade them to wait. He consoled them that the train would soon stop and then they could relieve themselves. However when the train eventually did stop it was pitch black and none of us were allowed to leave the wagons to go to the toilet. Faced with this predicament, the sick began to do their business in the wagons. They huddled together for mutual protection in a corner as they did their business. But then they could not escape from the crush in the corner because the healthy ones endeavoured to keep the sick and weak at a distance.”