… “we all understood that by the beginning of 1945 the German Army had suffered catastrophic losses and the war fronts were collapsing. The Red Army had penetrated deep into German-occupied territory, and the Allies in the West were flooding across the Rhineland. Day and night Allied planes bombed German-controlled areas. By this time the masses of prisoners had been reduced to a few thousand emaciated figures, who were, for the most part, incapable of work. These wretched figures were gathered together as one would sweep up rubbish, and assembled for transport. We knew full well that most of them could not survive the stress of the journey, that most would perish, and their end would be dreadful. With horror we asked one another, “What would our fate be if we were compelled to march once more?” Most of us were so weak and our perception so dulled, that we had become indifferent to the endless suffering and death around us. They appeared unconcerned as they awaited their fate in a state of complete apathy. Their dulled resignation showed that their senses, their feelings and their souls were already dead, long before their bodies died.”

…  “I was unable to resist bouts of deep depression. I was by myself and without friends when we were finally assembled into a marching column, but I was no longer affected by this. I had no feelings of mourning or remembrance. Not only was I a stranger among strangers, I was also estranged from my own being. I had no memories. I could no longer remember names or thoughts. It was as if I had no past.” 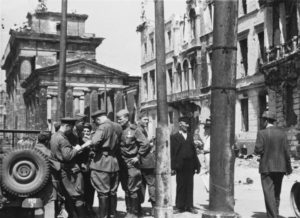 Red Army soldiers congregate on a street in Berlin after the fall of the city [United States Holocaust Memorial Museum, courtesy of G. Michael Jaynes]