The Flossenbürg concentration camp was founded in the spring of 1938, outside the small town of Flossenbürg, Germany.

Seven years later, it comprised a sprawling collection of subcamps, overflowing with prisoners from all over Europe. It originated with the idea of quarrying granite for civilian building projects; at the end, the work concentrated primarily on military production. It began as a camp for male prisoners; it ended with a population nearly one- third female. But throughout this protracted, fitful metamorphosis, human suffering remained the one horrifying given at Flossenbürg.

On March 24, 1938, a commission led by high- ranking SS officers examined the proposed site and found it suitable, based on its potential for producing granite. The establishment of the camp was part of a new strategy by Heinrich Himmler to exploit prisoner labour for profit by supplying building materials for the Nazi regime’s construction projects.

The first 100 prisoners arrived at Flossenbürg from Dachau on May 3, 1938. Further transports followed from Dachau, Buchenwald, and Sachsenhausen, bringing the camp population to approximately 1,500 by year’s end.

The first political prisoners, about 1,000 in number, arrived at the end of September 1939, when Dachau was temporarily cleared out to train what would become the first unit of the Waffen- SS.

By mid- July 1943, the Flossenbürg main camp held some 3,950 prisoners, including 10 women at the newly opened camp brothel, while eight subcamps held more than 800 prisoners.

Over the next 18 months, Flossenbürg underwent staggering growth, above all in the subcamps, whose numbers multiplied to more than 90 in 1944 and whose geographic extent was unusually wide, stretching across Bavaria, Bohemia, and Saxony into Thuringia and Brandenburg- Prussia.

By the beginning of 1945, the total number of prisoners in the Flossenbürg system exceeded 40,000, including more than 11,000 women. By early March, as the evacuations of other camps swelled the population further, the total peaked at nearly 53,000, of whom more than 13,000 were women.

At this time, the main camp was overflowing with almost 14,500 prisoners. For most of its history, Flossenbürg had few or no Jewish prisoners. Although a small number of Jews had been present from at least mid- 1940 (receiving particularly brutal atte 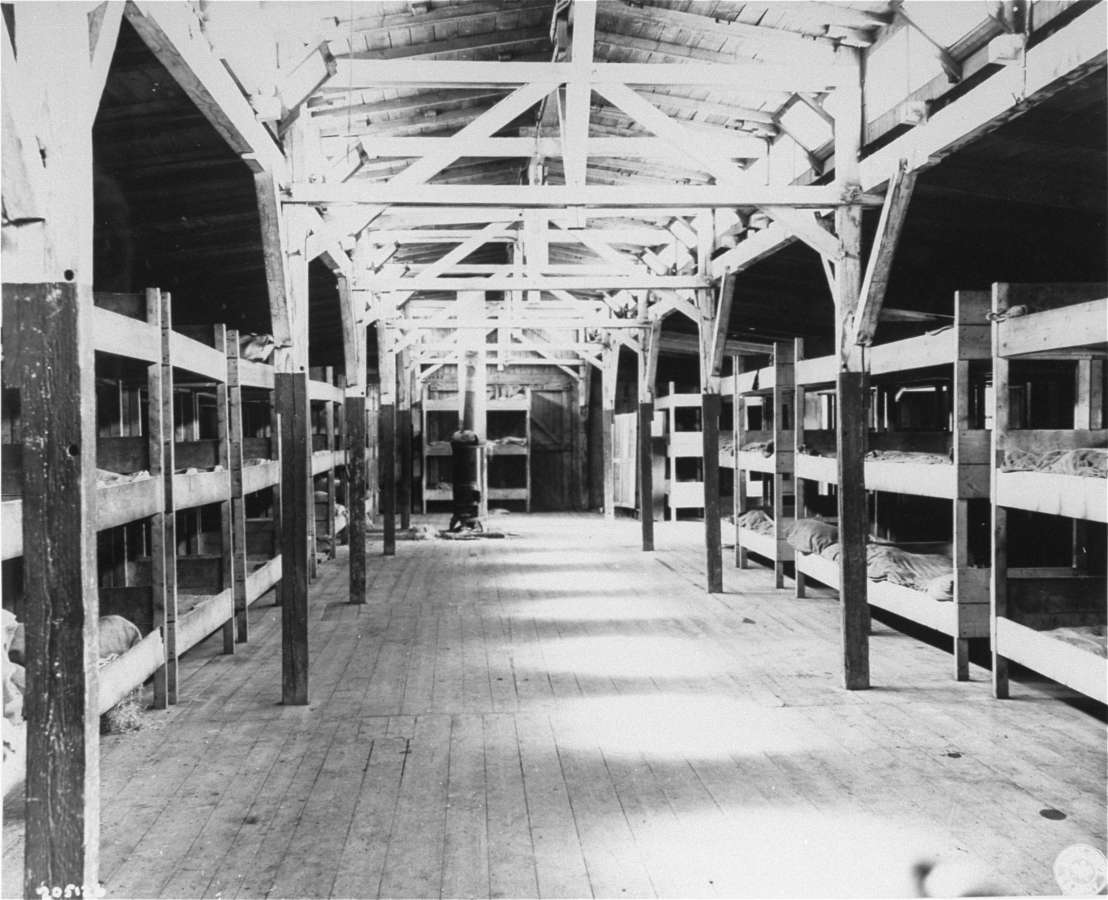 ntion from the guards), the last 12 were deported to Auschwitz on October 19, 1942. Up to that time, some 78 Jewish prisoners had died in the camp. Beginning in August 1944, however, overwhelming numbers of Polish and Hungarian Jews began to arrive. Ultimately, out of a total of 89,964 prisoners recorded entering the Flossenbürg system during its history, some 22,930 were Jewish.

Wedged between steep hillsides at the upper end of a valley, Flossenbürg had almost no room for expansion. Construction of the main camp, intended for 1,500 prisoners, had begun immediately upon the arrival of the first prisoners, with the erection of a barbed- wire perimeter. The prisoners then had to terrace the sharply rising valley floor to accommodate the camp headquarters, barracks for themselves, and housing for the SS guards. With the completion of these initial structures in early 1939, construction continued on guard towers and an internal camp jail, as well as infrastructure projects such as washing facilities, an electrical transformer station, and a sewer system. In 1940, excavations into the hillside began, creating new terraces for the construction of additional prisoner barracks in 1941. None of this work would prove even remotely adequate to house the accelerating influx of human beings. Forcing the prisoners to work (and thus also to sleep) in shifts, an innovation eventually undertaken to increase productivity, only partially alleviated the lack of bunk space.

The camp’s unfortunate location posed other difficulties. The high elevation impeded the water supply, while the terrace design complicated the functioning of the sewage system. Both problems were greatly exacerbated by overcrowding. Perhaps the most terrible consequence of the site, however, was the weather, which is unusually cold and wet in that corner of Germany. The prisoners, ill- clad and underfed, suffered grievously. Indeed, the effects of the foul weather were considerable even upon the camp buildings, and in winter the roofs needed to be cleaned almost daily to prevent them from collapsing under the weight of the accumulated snow. During Flossenbürg’s first months, prisoner labour was inevitably applied almost entirely to the construction of the camp, but work for DESt began in the stone quarry soon thereafter.

The SS hierarchy at Flossenbürg was thoroughly corrupt and brutal. After the first camp commandant, Jakob Weiseborn, protégé of the notoriously venal Karl Koch at Buchenwald, was found dead in January 1939, camp rumour leapt to the unsubstantiated conclusion that he had committed suicide to avoid scandal. His successor Karl Künstler was frequently drunk and delegated responsibility heavily to ruthless subordinates until his removal in August 1942. After a two- month interregnum, Künstler was replaced by Egon Zill, a cipher who remained in power only until April 1943. For the last two years of the war, Flossenbürg was run by Max Koegel, a vicious martinet with none of the managerial skill needed to handle the rapid expansion of the camp that occurred during his tenure. All these men had long, if speckled, careers behind them in concentration camp service, but Flossenbürg uniformly terminated their ascent.

The ways in which prisoners at Flossenbürg were tormented and killed were also virtually indistinguishable from the means routinely employed elsewhere in the camp system. Prisoners were beaten, kicked, and stomped upon (particularly by the Kapos, who were issued rubber truncheons), ridiculed and humiliated, forced to perform exhausting exercises, hung up by their wrists with their arms behind their backs, and doused with cold water during freezing weather, to mention only a few of the most common abuses. They were shot “while attempting to escape,” shot by firing squads, hanged, beaten to death, drowned, strangled, and given lethal injections.

Given the appalling conditions and inadequate food at Flossenbürg, the largest numbers of prisoners succumbed to disease and malnutrition. A dysentery epidemic brought the whole camp to a standstill for the entire month of January 1940, and typhus swept through the overcrowded barracks in September 1944 and again in January 1945. Mortality was especially high during the last chaotic months before liberation, as the entire system began to break down.