“After the morning Appell, most of the people on our transport including me were assigned to the night shift to assemble components for aeroplanes. Some of us thought they were V2 rocket parts. The workshop was in an enclosed tunnel. There was a shortage of food, but the regime was not as strict as we had feared. We had little reason to fear being beaten. There were several air raid alarms nearly every day. We drew encouragement with every flight over our camp. Typhoid and dysentery were continuously on the increase. The sick and dying lay everywhere; in the so-called toilets, in the gangways, on the stairs. It was not long after a frail or sick person sat down before a death rattle passed over their lips. It was a major task for the Camp Commando to remove the dying and the dead. For these weeks Leonberg was no longer a work camp but a death camp. Death dominated all thoughts in the camp. My legs were so weak it was all I could do to stagger to the night shift, although I was hardly able to work. I was assigned to a group using electric hammers to fix rivets. As I was so weak I could not hold the hammer properly and therefore my rivets were uneven. Our foreman was a Pole from Krakow. He warned me to work properly and hammer them in neatly. By this time I had also become a Muselmann; but psychologically I was not yet completely broken. Despite numerous warnings I could not rivet properly, so the foreman punched me in the face. Although I did not feel any pain I could feel the anger welling up inside me. “Have you now become a Muselmann who is beaten, but does not react?” I asked myself. I was weak and hungry and could hardly breathe. I kept returning to the water fountain to drink and I felt a little better.” 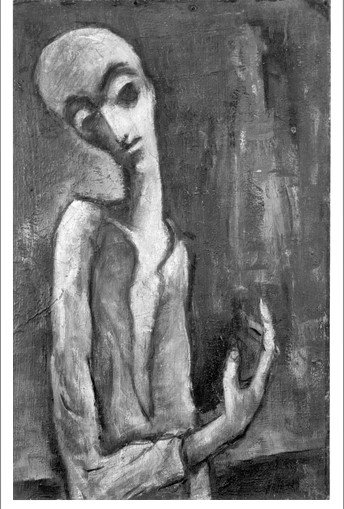