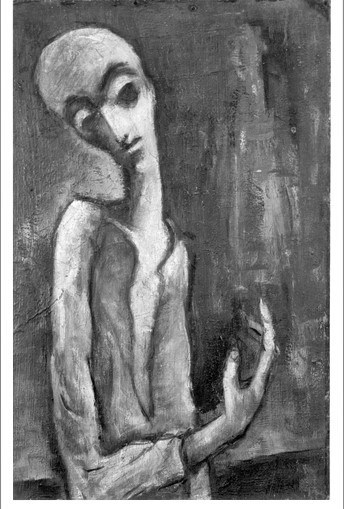 Muselmann, A drawing by Yehuda Bacon

“Under the Nazi terror, the psyche of man was completely changed or totally lost. Under Nazi terror, humankind descended step by step into inhumanity as the natural feelings of man were systematically destroyed. Thus a mother could give away her child to save herself and a hitherto decent person could become bestial under the impact of fear and hunger. Some were transformed into subservient slaves who served the master who later cold-bloodedly murdered them.

In this report, I have tried to recall these experiences to let facts speak for themselves without commentary and without burdening the reader with personal emotions. Still, it will be difficult for my words to be always credible. After so many years, can one now relate events, thoughts and feelings as one saw,thought and felt them? Probably not. How does a person feel when he sees his companion being shot the moment he stops walking, and realises he can barely walk himself? Of course at first he carries on, he wants to live, he reaches for his companion’s hand to support himself. But he (the companion) is at the end of his strength, he pushes the hand away, he won’t support the laggard. The weak one is left behind. But that one must have seen for oneself the lifeless face, the flickering eyes of a person about to confront his fate. The bullet strikes his neighbour and soon he will also be struck. Who can say what such a person experiences whilst walking the final steps of his life? Who can describe what he feels and suffers in these moments?”