EXCERPT FROM THE LONG NIGHT Journey to freedom “Night fell. We were tormented more by thirst than by hunger. After the massacre of Poing we were so terrified that we acquiesced to whatever happened to us without complaint. Artillery and gunfire rumbled on all around us through the night, and each new attack awoke new hope in us. We were on tenterhooks because of the noise of the fighting; it was music to our ears, and time passed quickly. The unbroken noise of weapons firing heralded the imminent end, the delivery for which we could hardly bear to wait. Whenever the  firing abated we fell into a shallow slumber, only to be startled awake yet again. Dawn had hardly begun to break when we were woken up, not by noise, but by silence. The morning of 30 April 1945 dawned, becoming always lighter, but still a dreadful silence all around. We peered through the gaps in the sides of the wagon to find out what this silence meant, but there was nothing of note we could see. Suddenly there was a babble of voices. The wagon-doors were torn open by figures in unfamiliar uniforms appeared before us. Hesitantly, we left the wagons. We looked carefully in every direction, but could see no trace of the old guards. Our comrades crowded around a few tanks parked next to our train. We were all crowded around, anxious to examine these strange vehicles. We were all extremely curious; were they friend or foe? Then we recognised the insignias on the tanks; they were American vehicles. Slowly I pushed myself forward until I was close enough to be able to touch this grey giant by stretching out my hand. On top of the tank sat two soldiers who, full of pity, threw various foods to us, and started to speak to us in English. We stumbled joyously about, touching the gun barrel and lying down on the tracks. We would have gladly embraced the soldiers and thanked them for the great fortune that we were once again allowed to be free people, now face to face with American soldiers. However, our appearance made ordinary people recoil and try to avoid coming into close contact with us.” 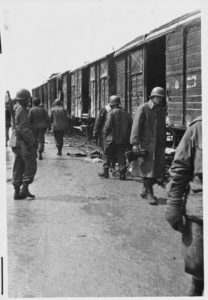