Not over yet – massacre in Poing

Before trying to get home Ernst decided to go to a farm to eat and listen to the radio to find out what was happening at the Front.

“We found a farmer who allowed us to stay; the whole of the rest of the village was already occupied by inmates from our camp, so we were lucky to find this accommodation. A Polish woman who worked for the farmer had shown us the way, and it was thanks to her that we were able to stay there. When we asked for bread we were told that there was none left, but the farmer’s wife promised to cook soup and potatoes for us. We rested and asked the farmer to switch on the radio, but it did not work. We were facing him and waiting for our soup when without any warning we heard wild shooting outside. Shocked by the clatter of pistol and machine gun fire, we recoiled from the benches. After a few moments, the Polish woman worker looked outside to see what had happened. Shortly after she returned, she wrung her hands, and made the sign of the cross. She told us that the SS had chased the former inmates, and all those who did not stand still were shot with pistols and machine guns. We begged the farmer to hide us in the cellar or barn, but his former friendliness evaporated and we read his rejection in his facial expression. Stony-faced, he said he could not hide us and told us to leave immediately. We had no time to think before the SS burst into the farmyard and aimed their cocked machine guns and bayonets directly at us. From their uniform we could tell that these were not our usual guards, but an SS army unit stationed in the forest. When they discovered that a transport of concentration camp inmates had been liberated in their vicinity, they chased us and took us all prisoner.

…Most of our former guards had disappeared into the distance when we had been freed, but this SS Army unit did not need their help. They carried out their duties thoroughly and quickly. With guns at the ready they hounded us and quickly scooped us up into groups, and then chased us back into the wagons. The road from the village of Poing to the station was littered with our dead and injured comrades who had been chased. Some were laying on the ground in pools of blood, groaning and writhing and pleading for help, but there was nothing we could do for them, each of us had to run for our lives. Those who could not move quickly enough were stabbed or shot. I felt the prick of a bayonet, but I did not turn my head. With all that remained of my strength, I ran for my life. Stützky, who was just a metre behind me, was speared by a bayonet. He let out a short scream, fell down and remained motionless on the ground. The murderous hounding continued, our running punctuated by the whistle of flying bullets and the cut and thrust of bayonets. We arrived at the station, panting for breath.

…Now, with bitterness and grief, I realised that only two of my friends had survived this bloodbath.

… One hour ago I had believed I was a free human being, now I was locked in this train, lonelier than ever, two of my dear friends who had endured so much suffering and even withstood the hell of Auschwitz were now dead. With their death their entire family line was extinguished.” 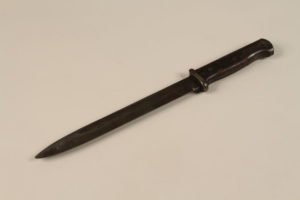