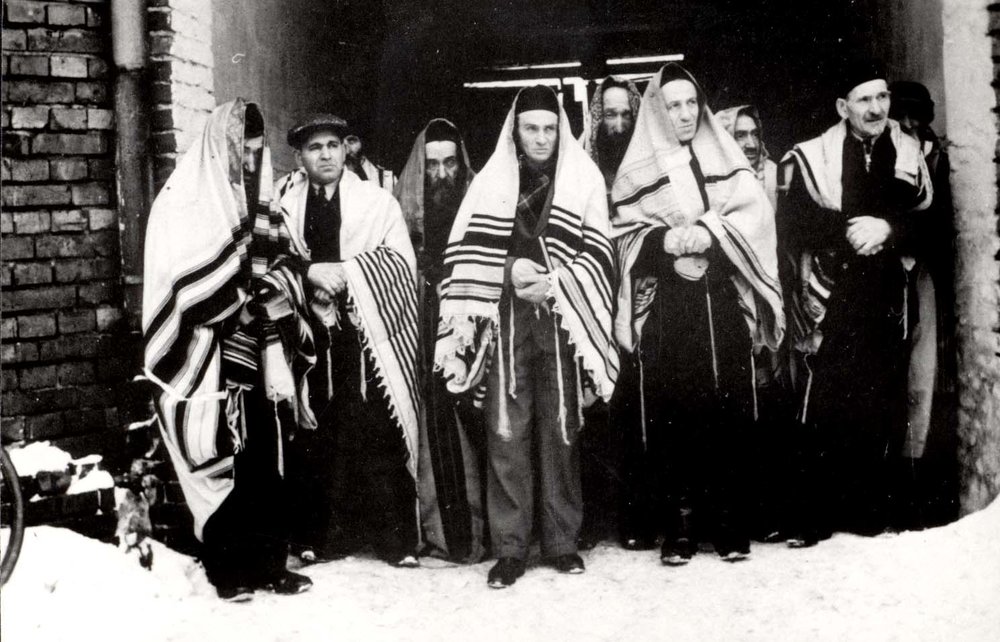 “The Day of Atonement approached, when the observant pray all day and fast for twenty-six hours without eating or drinking anything. Not even water is allowed to be consumed on that day. Again, it was Vogel who excused the religious men from work that day and arranged for them to remain in a hut on the building site. These people were prepared to work without food or drink. With their last strength, on empty stomachs, they were willing to undertake their workload.

Vogel told Machinemeister Kuka about these men and the way they conducted themselves. Silently, Kuka also acquiesced to this arrangement, so the very religious men were allowed to remain in the hut during this fast day. They stood together and prayed, full of fear that they might be discovered and punished. Some had the tattered remnants of a prayer book from which one of them quietly lamented as he read out the prayers.

Jews in Zawiercie managed to pray in the snow in the ghetto. It took super human strength and devotion to pray and fast in the cruel conditions of the camps.

Late in the afternoon it suddenly became very dark. A heavy storm arose, driving torrents of rain before it, forcing everyone to stop work. With a few friends I also took shelter in the hut and saw the group of religious people swaying backwards and forwards, deep in prayer. The room was dark because the hut, which was made from wooden boards, had no windows. Like ghosts in rags and shrouded in the shadows, they swayed back and forth as the “Cantor” intoned the prayers. Very little light penetrated the gaps between the boards. Now the prayers reached the concluding climax (Neilah); these required a quorum of ten men to be present. With silent glances they turned towards us, inviting us to join them. We could see how fervently these men prayed, but we were also overwhelmed by feelings of disappointment and bitterness about God and religion. We were torn by this paradox. Our hearts were full of bitterness and uncried tears. We discovered it was impossible for us to recite the psalms and prayers. There was nothing we could do except mourn the terrible destiny and tragic misfortune that had befallen our people and destroyed our parents and families. The rain drummed on the roof like a thousand tiny hammers. We huddled closer together in the room. Tearfully and with a quivering voice, we imperceptibly joined in the prayers of the faithful. “God, open the gates of heaven for our prayers. May the gates of The Merciful One not be closed.” We became a large dark trembling mass shattered by the impact of our fervent prayers. Our hunger and tiredness evaporated, our protests and resistance were forgotten. The heartrending sounds of our prayers and sobs merged with the loud drumming of the rain and the howling noise of the storm. Once again the “Cantor” lifted up his voice and prayed, “God, the day is ending, we are drawing near to your gates. Oh God, forgive us, pardon us, excuse us, have pity on us, have mercy on us.”

Outside it grew darker and gradually the storm abated. We had to lower our voices. Wet from the rain and wet from our tears we concluded our prayers. Soon after, our Group Elder Vogel opened the door for us to march back to the camp together. With lifted hearts we lined up, leaving all our accumulated tears and prayers behind in the hut.”