“As we struggled onward those whose bowels ached with pain groaned, “Slower, let’s have a break!” Slowly this mutinous chorus grew. The SS were infected by the growing tension and began to panic. A new command was issued; anyone failing to obey any order would be shot. In their confusion many SS started wildly shooting, sometimes into the air, sometimes into the inmates whose plaintive cries and pleas terrified the SS still more. The shooting quickly suffocated our desire to slow down or rest. The old instinct to fight for and preserve human life no matter what the price or circumstances prevailed once more. It overtook the paralysing tiredness and bitterness that had fuelled our dangerous and mutinous mood. Somehow the march resumed its former rapid tempo. We could no longer help the weak ones, so they remained behind and were shot by the SS.

We had already marched about thirty kilometres and it was past midnight when we were ordered into a farmyard. We had to lie down under the open sky on snow blanketed, hard-frozen ground. Three times we were expressly warned that if we got up we would be shot immediately. Then most of the SS disappeared so they could search for somewhere to sleep. Some remained to guard us. We were ordered to remain motionless so that the smallest number of guards sufficed. We put our blankets on the snow, obediently stretched out, and almost immediately fell into a deep and exhausted sleep. It did not take long before we were woken by the penetrating dampness of the snow which had been transformed into ice-cold water by our body heat. We tossed and turned restlessly on the wet ground as we impatiently waited for dawn when we would be allowed to move. Many were tormented by the need to relieve themselves but they were not allowed to get up.” 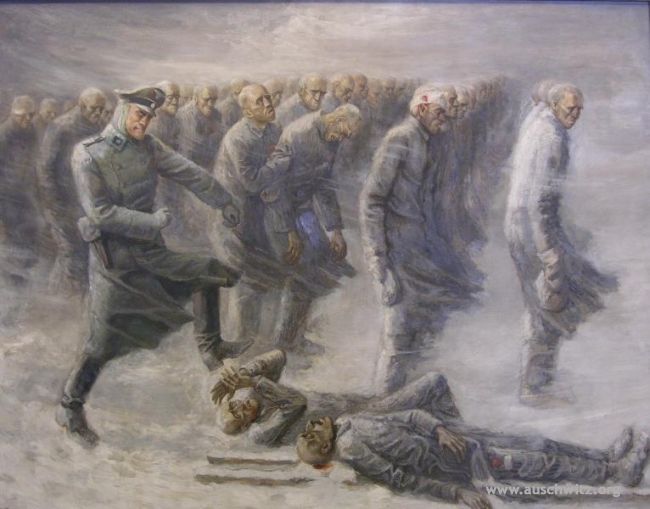