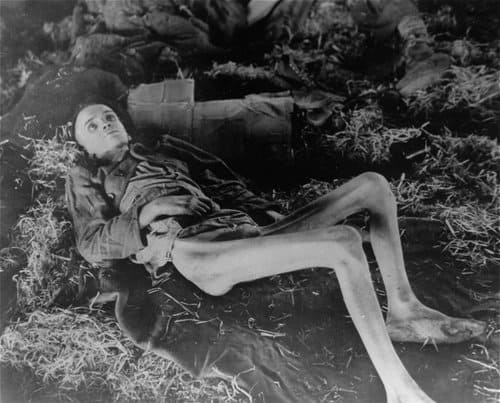 This survivor at Nordhausen concentration camp bears all the hallmarks of a so-called Muselman. He died shortly after. [United States Holocaust Memorial Museum courtesy Ilona Shechter]

“The pointlessness of many of the orders issued by those who ran the camp demonstrated their malice; they could only be the product of sadistic minds. The subtlety of the regulations and the constant tensions they evoked seemed deliberately calculated to destroy both body and soul. Unfortunately for many, this goal was achieved. When their will to live was broken, they gave in to apathy and finally they bore the features of a “Muselmann”.

Among those who fitted that description were some who came from our home town.  Many others and I possessed the will to continue living. Even today, this utterly inexplicable will to live still seems unbelievable to me and cannot be analysed. Our spirit of resistance enabled us to continue existing in a concentration camp despite being enveloped in senseless brutality and tortures where human beings were corrupted and died in humility and amidst degradation. An inexplicable instinct enabled us to recognise danger from afar and conditioned us to be constantly vigilant day and night, to patiently await the morning, and not to give in.”

“German term widely used among concentration camp inmates to refer to prisoners who were near death due to exhaustion, starvation, or hopelessness. The word Muselmann literally means “Muslim.” Some scholars believe that the term originated from the similarity between the near-death prone state of a concentration camp Muselmann and the image of a Muslim prostrating himself on the ground in prayer. Many victims, totally lacking the wherewithal to adapt, reached this stage soon after arrival in a camp.

Other prisoners succumbed to sickness, physical abuse, hunger, and overwork. One could identify Muselmanner by their physical and psychological decline; they were lethargic, indifferent to their surroundings, and could not stand up for more than a short period of time. Most other prisoners avoided contact with Muselmanner, in fear of contracting the condition themselves. The Nazis running the camps considered the Muselmanner undesirable, because they could not work or endure camp rule. Thus, during selections, these victims were the first to be sentenced to death. A person at the Muselmann stage had no chance for survival; he or she would not live for more than a few days or weeks.”