Key Events in the Nazi Regime

Although the Nazi regime spanned from 1933 to 1945 and within that time numerous atrocities were committed, there are some key events which shaped the regime as a whole.

Under the rule of Hitler, Germany saw a transformation into a totalitarian state which controlled its people’s lives in pretty much every aspect. This was able to happen through the Gleichschaltung legal process. The official name of the state as it was then, translates to the German Reich. This was the case until 1943 when the name shifted to the Greater German Reich until 1945. You may also have heard it referred to as the Third Reich, meaning the Third Empire.

In this guide, we are going to be looking at a timeline of the key events of the Nazi regime, all of which worked to promote evil and the genocide of millions of people across occupied Europe. 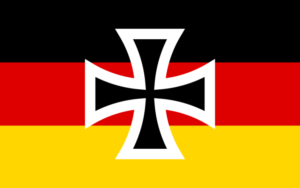 The abdication of Kaiser Wilhelm. The Weimar Republic declared and take his place.

The Treaty of Versailles is signed by the “big three” and Germany. 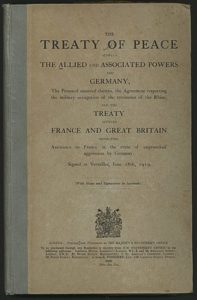 All having different aims, there was much discussion as to how to deal with the Germans after World War I.

Georges Clemenceau wanted revenge and to do this, he believed that the treaty had to be designed in order to weaken Germany so much so that they would never have the power to start another war.

Woodrow Wilson had a different approach. He did not want the allies to seem cruel towards the general German population as he believed this would invite cause for war. Many historians believe his approach to less harsh because the USA was more detached from the effects of the war than that of Britain or France.

Llyod George wanted a middle ground. He did not wish to unsettle Germany too much as to trigger a revenge war, but he also felt they should be reparations for war damages to all Britain and France to help rebuild the cities which were destroyed. In short, he wanted justice rather than revenge.

Adolf Hitler was sent by the German Army to spy on the German Workers’ Party. During his time spying, he found that he connected with their political ideas so much so that he became a member. 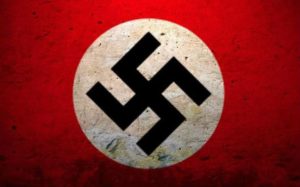 Adolf Hitler became the leader of the Nazi Party with the title Führer.

The Munich Putsch. Hitler and the Nazis fail at an attempt to overgrow the Bavarian government. He was asserted and charged with treason. He was later sentenced to prison for 5 years, but only served 10 months. During this time, he wrote Mein Kampf. 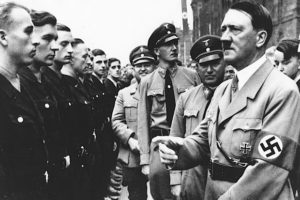 The Great Depression hit and many Germans faced unemployment and poverty. As a result, the Nazi party saw a surge in popularity and membership.

In September 1930, the Nazis gained 18.3% of the vote in the Reichstag election to become the second largest party and growing.

Nazis gain 37.4% of the vote, becoming the largest party.

Hitler appointed Chancellor of Germany by President Hindenburg.   Only a few days later, Hitler drew up the Nazi foreign policy which focussed on securing lebensraum (living space) for the German “master race”.

The Reichstag Fire, which broke out at the Reichstag building as was blamed on the Communist party. As a result, they were banned which gave the Nazis a clear majority in government. Many historians believe this to have been a set up due to overwhelming amounts of evidence. 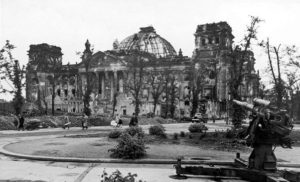 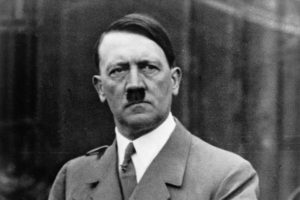 The re-occupation of the Rhineland, despite this going against the Treaty of Versailles.

Hitler Youth membership made compulsory for all boys.

Munich Agreement. The Allies agreed that Germany could have the Sudetenland region of Czechoslovakia in return for peace.

Kristallnacht or “the night of broken glass”. This was where Jewish shops, businesses and synagogues were destroyed. Following this, the Jewish population faced a fine for the destruction. 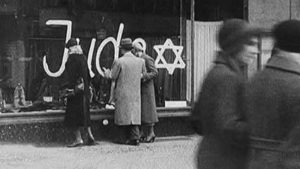 Britain released a statement that guaranteed Polish independence. If Germany were to invade, Britain would intervene.

(23rd) Nazi-Soviet Pact – an alliance between Hitler and Stalin which stated that the two nations would spilt Poland. 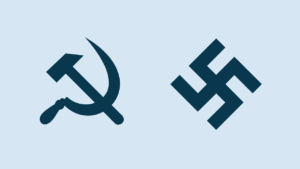 Hitler invades Poland on the 1st and the poles are defeated and occupied by the Nazis. On the 3rd, Britain and France declare war on Germany as a result.

Hitler declares war on the United States. Following Japans attack on Pearl Harbour, the Us declared war on Japan which meant that Hitler had to retaliate in such a way as part of the Anti-Comintern Pact.

The plans for the ‘Final Solution’ approved. 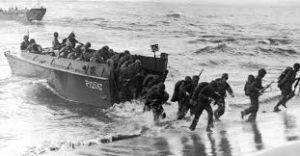 Hitler commits suicide in his bunker alongside his wife.

War crime trials begin against the Nazis, known as the Nuremberg Trials. 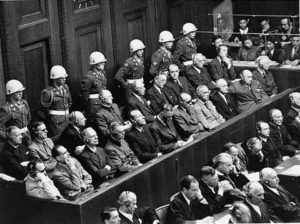