Many terrible atrocities were committed during the Nazi Regime across Europe. Around 6 million Jews were murdered alongside another few million people of colour, Gypsies, Catholics, homosexuals and those who opposed the regime.

Something you may have heard referenced in books, documentaries, films or in a history class are “Death Marches”. These were designed as a method of death for those who were inmates in the concentration camps set up by the Nazis. Their sole intention was not just to kill, but to also transport the inmates from one camp to another with many dying along the way or being executed en route. This is how they earn their harrowing name.

When the winter between 1944 and 1945 approached, it was almost certain that a German defeat was imminent. The soviet forces were fast approaching from the east, meanwhile the American and British army had just liberated Paris and Brussels in late summer of 1944 and were also fast advancing towards western Germany.

Even though both the Nazi leaders and the German population were very aware that the war had been lost, the Nazis continued to murder their victims rather than giving up.

As the allied forces approached Auschwitz as well as other camps in Poland in the early months of 1945, German authorities frantically worked to cover up any evidence of their genocide by burning documents, incriminating buildings and corpses. For the victims who were still alive during this panic, the Nazis decided to move them, both Jewish and Gentile alike, from near the eastern battlefront camps inside the Reich, away from the path of the advancing allied troops. Once moved, healthier prisoners could be used as slave labour for the German war effort.

The prisoners were forced into open rail cars or marched on foot through the snow and mud where they predictably become sick and many actually died of “natural causes”; i.e sickness or the cold. Others were executed for attempting to escape or not complying – they could be expected to be shot if they fell behind.

Once they had left the camp they were originally being held in, the prisoners were under the total control of the German guards. However, these guards were often disorganised and did not really know what they were doing causing chaos.

The guards did not provide the victims with food or supplies for those who were injured or ill. The weather was bitterly cold and people were dying from that alone. Some prisoners recalled that their hunger forced them to eat snow as it was all they had. The state of havoc is what generated these “evacuations” into what we know as death marches. 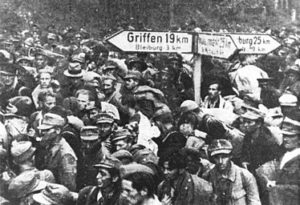 Furthermore, the prisoners were never informed as to where they were going. Many wondered whether they were being taken to another camp to be immediately killed. One saviour said: “they were going to mow us down with machine guns, why didn’t they just get it over with?”.

The SS organised the prisoners into rows which were usually five across and then into a large column. The guards were then on the outside of the long column. Some were in the lead, some remained on the sides and others were back the back; so, they were basically boxing in the prisoners to avoid any escape attempts or misbehaviour.

The column was then forced to march, and at some points they were made to run. Since many of those on the march were in very poor health, they were seen as a burden in holding up the rest of them, so the guards would simply shoot them to move on quicker.