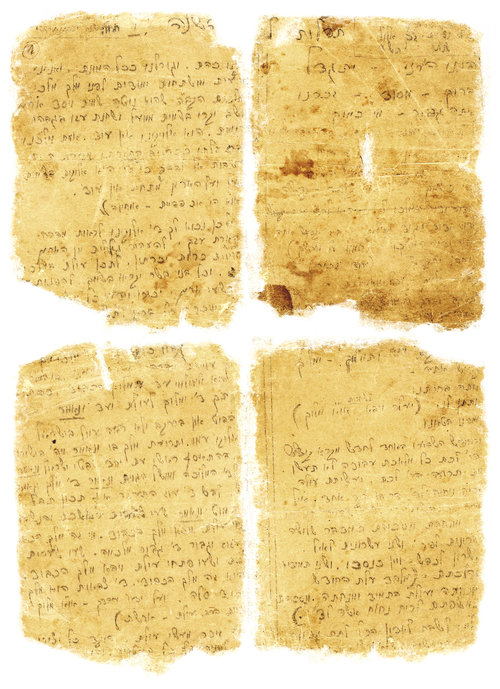 Pious Jews tried so hard to preserve Jewish customs under camp conditions. The remarkable Wolfsberg Machzor was inscribed from memory by Naftali Stern in pencil on cement bags in the Wolfsberg labour camp (part of the Gross Rosen network) on the eve of Rosh HaShanah. Photocopies of the prayers are in the Yad Vashem archives.

“The coming of autumn coincided with the major Jewish festivals. On the morning of the New Year Festival we marched as usual to the motorway. Some moved their lips in silent prayer as we marched; others wanted to try to secretly recite the traditional prayers during a break from work. I, myself, marched in silent protest against the doctrine that we should quietly accept our fate.

Again and again I asked myself the question, “Are we really a chosen people, and if chosen, for what,  chosen only for suffering?” I reflected on fragments of Jewish history:  reports of the Spanish Inquisition and pogroms perpetrated by God fearing Christians streaming from church after Holy Mass. “And now”  I thought “that those of us who were marching were also writing another chapter in the history of this chosen people, another chapter of suffering, humiliation and extermination.” All my thoughts and feelings rebelled against the notion that our people were destined to suffer in order to fulfil a certain mission, a mission that I could not understand. I refused to accept that my faith obliged me to endure suffering, conspiracies and torments as a gift from God. I could not and did not pray. The days after New Year were filled with work and the daily monotony of camp life.

The Day of Atonement fell eight days after the New Year.  When we returned from work that evening, many men secreted themselves in corners and between bunks and prayed. A few of us sat on our beds and stared blankly into the night. The future loomed before us like a dark abyss that threatened to consume us. Slowly my heart turned to stone. I was seized with a single thought: “How can one still pray in such a situation? To whom could one pray, for what could one give thanks?”

One of the guards called Anton, who was from Kattowitz in Upper Silesia, stood in front of us legs apart and striking a Hitler-like pose to give a speech. In appearance and speech he tried to model himself on Hitler. “Listen, you damn Jews,” he said, “It is not only your businesses and way of life that have been terminated, it is also your customs and service to God. If I catch one of you who has not eaten his bread he will get fifty strokes on his naked arse. I couldn’t give two hoots about your God.”

Soon we discovered the reason for this night time Appell. The camp command had heard that many of us had not eaten in order to fulfil the ritual of the Day of Atonement. The demeanour of those friends who fasted was so much more remarkable because despite their poor general condition, they resolved to hunger. The Nazis wanted to rob those who remained true to their faith of their inner strength.