A few days later, when we were due to depart, one of the junior Kapos failed to appear. I was appointed in his place by the “Oberkapo” (senior Kapo). I was allocated a group of eighteen Hungarian Jews. They had to unload several wagons of iron bars. Among this group was a young man who had been a member of the same Zionist organisation to which I had also belonged.

… We had an animated conversation … Unfortunately, all this was observed by an SS Block Leader who happened to be on a tour of inspection. Suddenly I heard a bellowing voice, “Where is the Kapo?” I tore myself away from this conversation. I immediately assumed a military posture and marched in the regulatory manner towards the SS man. In a curt military voice I reported, “Eighteen inmates for unloading wagons!”

… To my horror I discovered that only twelve of the eighteen were standing in line. “False report!” screamed the SS Block Leader. He struck my head so hard that my hat fell to the ground. “Where is the Oberkapo?” he screamed. Oberkapo Helmut duly arrived in great haste. Then I had to search out those who were missing. Finally, when they were all present the SS Block Leader ordered the Oberkapo to punish me for neglecting my supervision duties, so I received twenty-five lashes on my naked backside. Helmut, who would like to have spared me, was forced to march me to the toilet in the presence of the SS man. The doors of the toilets were all closed and locked so that the civil workers would not hear my screams. When the few civilians who were working in the vicinity of the toilets saw our small group approach, they recognised the “important gentleman” (i.e. the Block Leader) and cast compassionate glances in my direction. 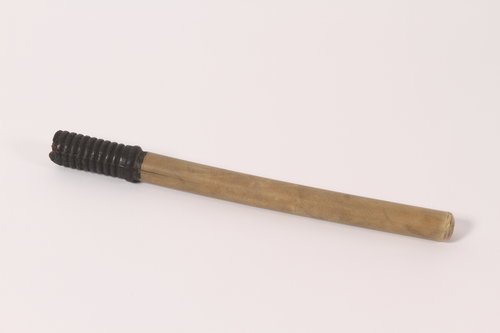 The all too familiar routine began when we arrived in the toilets: under the supervision of the SS Block Leader. I had to bend over, the Oberkapo began to beat me with a rubber truncheon, counting each blow out loud. The first few blows were brutal and the pain was terrible, but the next few were more merciful. As he counted, Helmut shouted loudly and over the noise of the beating in order to deceive the SS man of their force. I also continued to scream loudly. After that we were ordered back to work, but this time at the very fast pace set by the Block Leader. With my truncheon I was compelled to urge on all those who failed to keep up. This “work” left me with a very bitter taste and I felt troubled for a long time after as I remembered the day when I was forced to act like a Kapo. Not only did my body have to bear the consequences, I could not get out of my mind the indelible, hateful memory of the hours when I was forced to oppress my comrades.”
BrutalityCamp hierarchyFünfteichen campKapos